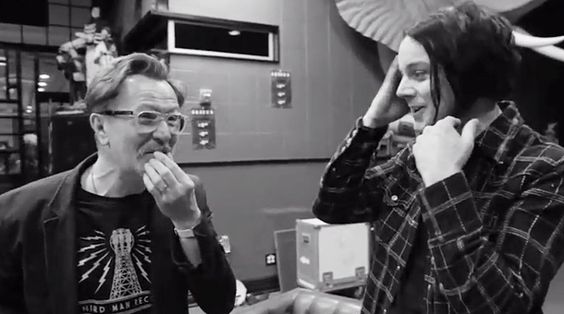 Jack White interviews Gary Oldman, and we make it better because we can

Leave it to Jack White to remerge into the public eye as weirdly as possible. White’s been relatively quiet since the release of 2014’s Lazaretto. This week, he reappeared with an interview of acclaimed actor, Gary Oldman for Interview Magazine.

The discussion is as dry as you’d expect, which is why I took it upon myself to pull a bunch of quotes out of context, and re-arrange them into a far more interesting interview. So, without further-ado, here is Jack White interviewing Gary Oldman, the Vinyl Collective Remix.

GARY OLDMAN: Jack, how are you?

JACK WHITE: I’m going to be speaking as Winston Churchill for the rest of the interview.

OLDMAN: He defended the British constitution, won the Nobel Prize for Literature, painted 500 paintings, and exhibited at the Royal Academy. I mean, if you could find someone else who has done that …

WHITE: The only date I went on in high school was to see Dracula. I had to keep staring at your eyes to see if it was really you.

WHITE: Tell me why.

OLDMAN: It’s in the eyes.

WHITE: I have a fun thing for you to try next time you’re at a coffee shop. I think you should say as loud as possible, “Hold on one second, I’ve got another call.”

OLDMAN: [laughs] I’m going to try that in Starbucks when I’m in the line.

WHITE: I bet. But you do a great job of disguising yourself in everyday life.

OLDMAN: If people don’t expect you to be there, they don’t see you.

WHITE: “Why is he buying rat poison at the hardware store right now?”

WHITE: Well, sometimes I had to use my other hand, too.

OLDMAN: I’m a little scared of where it’s going.

OLDMAN: I think you single-handedly made vinyl a real thing again.

WHITE: I’m going to write that down.

OLDMAN: I went to a crowded restaurant many years ago in Manhattan with David Bowie. And, oh my god, talk about atmosphere change.

WHITE: Carl Sagan would often say, “The sky calls to us. If we do not destroy ourselves, we will one day venture to the stars.”

WHITE: I hope not.

JACK WHITE IS A MUSICIAN, RECORD PRODUCER, LABEL HEAD, AND ACTOR. A FOUNDING MEMBER OF THE WHITE STRIPES, THE RACONTEURS, AND THE DEAD WEATHER, HE IS CURRENTLY AT WORK ON HIS THIRD SOLO ALBUM

Categories:
Previous Story Dave Grohl and Kristen Bell’s death metal rendition of ‘Do You Want to Build a Snowman’ is all sorts of uncomfertable
Next Story Malcolm Young (1953 – 2017)
Follow Vinyl Collective!