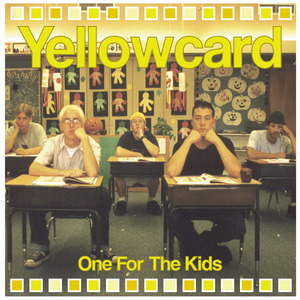 Yellowcard One For The Kids Pre Order & A Note From SRC!

Jenna here from SRC! I am proud to finally announce the official pre order and release date for the first ever vinyl pressing of Yellowcard, “One For The Kids”. Shop Radio Cast will be releasing this record on August 21st, 2012 with pre orders launching tomorrow, June 28th 2012 at Noon EST HERE!

This project is a very special one for us at SRC and we know many of you have been waiting patiently for it. We assure you it was well worth the wait. This is actually SRC’s first catalog release (SRC001) and something we have been diligently working on for a total of 525 days now. Yes, I have been counting! We have faced many hurdles with this release in specific. However with the support of many we are excited to not only be able to finally release this, but do so in a way that will excite vinyl collectors from all over the world!

In late 2010 Danny and I decided that it was time for SRC to pursue putting out its first vinyl pressing! We approached Lobster as for we have worked with the label through our other company PunkRadioCast (online radio station) quite extensively between 2001-2007 ish. A lot of the music Lobster put out was very meaningful not only to us personally but the others who worked at and listened to PunkRadioCast. I can still clearly remember the days when the Lobster envelopes would arrive with album advance copies and we would all sit around listening to what Steve was putting out next! It was also very exciting to see that many people at ShopRadioCast and amongst the Vinyl Collective community shared the same appreciation for Lobster Releases many years later.

In January of 2011 planning for One For The Kids began! Danny and I had a vision of how we wanted the artwork for this release to be produced since day 1! We knew audio wise this album would suffer in sound quality if we tried to equally separate all the tracks onto a single LP. With us moving the bonus track “Rough Draft” into a single 7” it not only solved this audio issue, but allowed us to utilize many aspects of the artwork in various ways.

This presented our first issue. Lobster no longer had artwork files! We had spent many hours looking to recreate the artwork in the best ways as possible but nothing satisfied our vision. Luckily in early 2012 one of our customers from Shop Radio Cast approached us and informed us he was the original designer for most of Lobster Record’s releases and he had the files on hand! I literally almost fell off my chair. Labels if you are looking for an artist we highly recommend Michael Johansen.

With artwork finally found, Danny and I were beyond ecstatic to see our vision put to work! There is no one in the world who could have done a better job than Mike did! Here are the details for the artwork/ paper products:

The audio aspect of this project has also been something that ended up working in various stages. As I mentioned we did not want to crunch the songs onto a single LP and OFTK posses a time breakdown that is just not ideal for vinyl pressing. The bonus track “Rough Draft” is over 4 minutes long and that made it difficult to split the album between two sides without compromising the sound. With us moving “Rough Draft” to a single 7” this gave us under 20 minutes per side, offering no compression.

Additionally, we had a set of plates made prior to the ones that are being used in this pressing. These were created before we began working with Dave at Lucky Lacquers! There were a total of 6 test pressings created from this first set of plates before we had the lacquers recreated from scratch. We are extremely pleased with how the sound has turned out on this second round.
Moving forward, today is a very exciting day for us as for we are finally glad to not only release a passion project, but to give you a record many have been waiting very patiently for! We thank you for that!

For those who are also Lobster Records fans, today is also the official release date for Staring Back – On vinyl pressing limited to 323 copies! Here is a list of everything currently available at SRC from Lobster Records: